Beijing opera or Peking opera (Jīngjù 京剧) is undoubtedly one of THE symbols of the Chinese culture, and it also has an important role in the history of the Chinese civilization. Peking opera is a Chinese stage art which tells a story combining music, vocal performance, dance and martial arts. This form of Chinese opera grew out of other forms of opera (mainly Hui opera) and was fully developed by mid-19 century.

History
In order to understand the origins of Peking opera we should go back in time to the Qing dynasty period (1644-1911):
Until the year of 1790, number of performing arts dominated the entertainment field in China and influenced the formation of Peking opera. The most important of them was Huiju (Hui opera) originated in Anhui province. So, what happened in 1790? On this year the Emperor Qianlong celebrated his 80th birthday. One of the most successful performances in the celebration was a Hui opera performance which combined music, vocal skills, dancing and acrobatics. This performance captured the heart of the audience and since then, more and more Huiju troupes arrived the capital to perform. Influenced by the local culture, these troupes adopted new musical instruments and performing styles and formed a new opera genre- Peking Opera. Combining elements of Qinqiang opera, Han opera, Kunqu opera, and local tunes of Beijing, Peking opera suggested innovative and simplified melodies and gained in popularity.

Roles
Peking opera was originally an exclusively male pursuit. The appearance of women on the stage began unofficially during the 1870s, when female performers began to play male roles. Peking Opera characters reflect exaggerated form of characteristics expressed by colorful face paints and costumes and based on the characters’ sex, age, personality, occupation and social status. There are 4 main categories of characters in Peking Opera (each of them is divided into subcategories): Sheng, Dan, Jing and Chou. An actor usually specializes in one category during his career, crossover artists are exceptionally talented and rare.
These are the four general categories:
Sheng (生)– the main male role, an adult and usually positive character painted with light face paints.
Dan (旦)– female role.
Jing (净)– painted face male roles with specific characteristics (courage, wiliness, cruelty..).
Chou (丑)– male secondary role, clown role, usually face painted with white patch of white chalk around the nose and eyes.

Performance Elements
A Peking opera performer develops four main skills: speech, sing, dance-acting and combat. Using these skills, the performers bring the stories to live. As already mentioned, every character wears masks, face paints and costumes in accordance with their characteristics. For example, a brave and loyal character wears a red mask, a serius character will wear a black mask etc.

The performance on stage is accompanied with an orchestra, traditionally sitting behind the scenes. Every opera genre uses its local musical instruments mainly Chinese stringed instruments and percussion. As mentioned, Peking Opera is a fusion of other chinese opera styles. Thus, its orchestra consists of both traditional instruments adopted from other genres and local instruments. Here are some examples:

Drum: Percussion in various forms used to describe battle scenes, confrontations, executions, etc.
Gong: used in scenes where military officers enter the stage or at highly emotional moments..Players take the gong’s rope with their left hand and beat the edge of the gong with their right.

Yue Qin (月琴): A two-stringed instrument used to empower and accompany the actor’s song in the scene.

Sun Xian (三弦): A long neck, three-stringed instrument a bit smaller than the erhu. It has the widest range and richest timbre among the major musical instruments of Peking opera. Its various tones range from forceful to exquisitely soft. 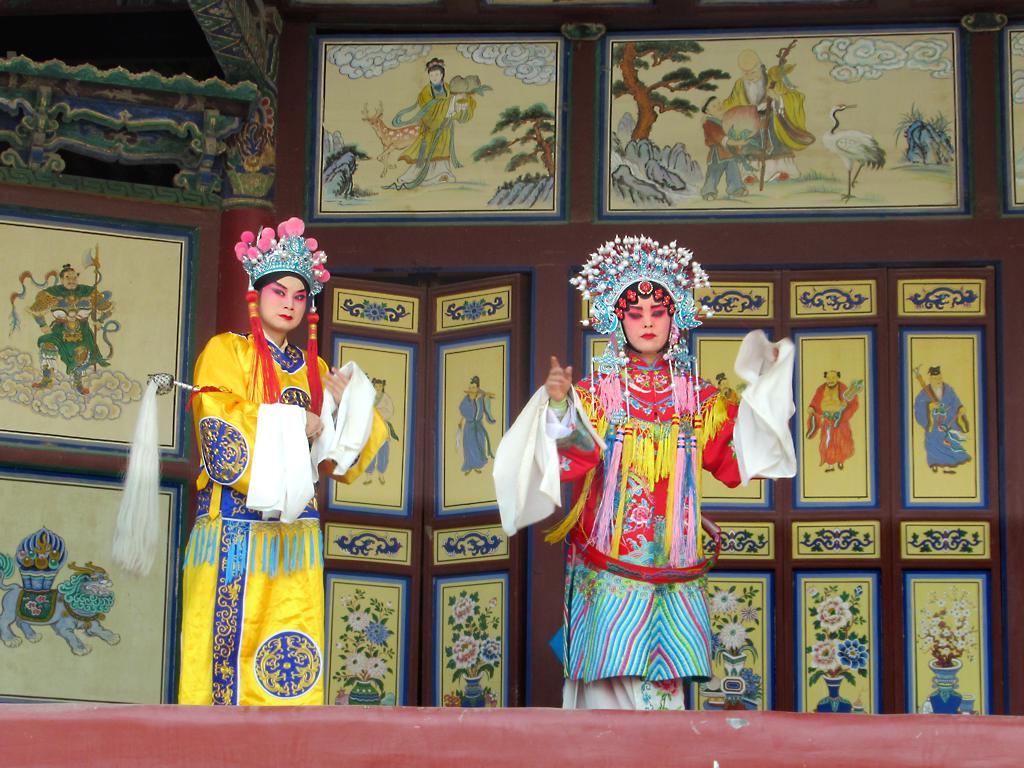 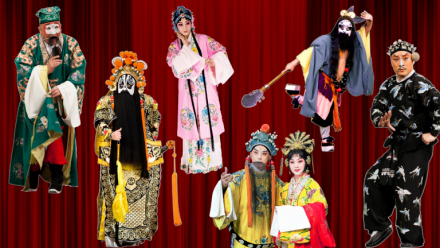 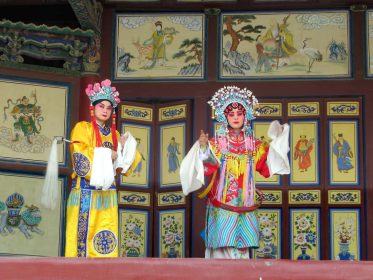 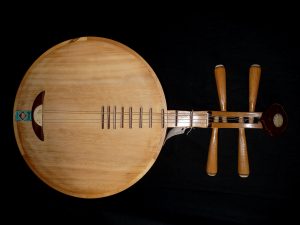 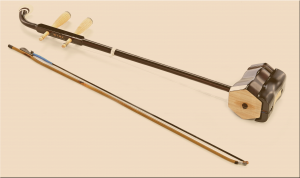 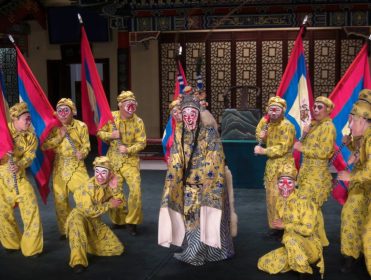