These short videos adopt the form of animation, deconstructs painting techniques, appreciates the stories of paintings, and expresses the philosophical thoughts of “the principle of nature” and “the harmony between human and nature”, presents an “Oriental Garden” to all audiences which fulfilled with classical aesthetics.

Qian Li Jiang Shan Tu (A Thousand Miles of Rivers and Mountains) is a blue and green scroll masterpiece completed within half a year by Wang Ximeng, an eighteen years old painter in the Northern Song Dynasty. It is a representative work of outstanding artistic achievements in the blue and green landscape paintings of the Song Dynasty. The scroll is 51.5cm long and 1191.5cm wide and now exhibits in the Palace Museum in Beijing.

The stunning landscape in Qian Li Jiang Shan Tu (A Thousand Miles of Rivers and Mountains) is colored with mineral azurite and stone green, thick mountains and rocks, lush and greenery picture, and rich colors. By using the scatter method, the painting presents the artistic effect of “scene moving follows the step”, vividly expressing the concept of harmonious coexistence between human and nature.

Tao Yuan Xian Jing Tu (Taoyuan Fairyland) is a masterpiece created by Qiu Ying, one of the “Legendary Four Artists of the Ming Dynasty”. The scroll is 175cm long and 66.7cm wide and currently collected in the Tianjin Museum.

Tao Yuan Xian Jing Tu (Taoyuan Fairyland) adopts a vertical and lofty chapter and is divided into three layers, presenting a secluded resort far away from the bustling city. Through the author’s ingenious depiction of natural landscapes and dynamic characters, the characters in the painting and the scenery complement each other and express smartly. The joy of seclusion in the minds of literati at that time.

Que Hua Qiu Se (Autumn Scenery of Mount Huabuzhu and Mount Que) depicts the autumn scenery of Jinan Mount Huabuzhu and Mount Que. It adopts the composition of plain and distant, the virtual and the real coexist, the painting is clear and calm, presenting a quiet and leisurely natural style. The colors of the two peaks in the picture are more eye-catching. Other sceneries like tiny islands and trees are painted with different shades of cyan. Houses, cows and some leaves are painted with warm, bright colors such as red and yellow. It shows the clearness and cleanliness of autumn, and also shows the peace and tranquility of humanity.

Jiang Shan Qiu Se Tu (The Autumn Landscape) was created by Zhao Boju, royal family member of the Song Dynasty. The scroll is 56.6cm long and 323.2cm wide. Currently collected in the Palace Museum in Beijing.

Jiang Shan Qiu Se Tu (The Autumn Landscape) depicts the scenery of mountains and rivers in the north. The layout of the picture is rigorous, the outline is lean, the color is gorgeous, mainly in azurite green with other bright and harmonious colors like vermilion, ocher, white, etc. In the layout, the traditional “scattered perspective” method is used to combine lofty and far-reaching styles, which brings the effect of large capacity, odd layout, and degree of opening and closing, and a harmonious relationship among the variability. The entire artwork is fulfilled with “morale” of the literati, expressing the author’s deep feeling of loss of his homeland.

Tang Gong Shi Nv Tu (Ladies of Tang Palace) mainly describes the living conditions of aristocratic women in the Tang Dynasty. Lines are meticulously crafted, the colors are rich and mostly in red. The appearance of people and objects are plump, the movements are concentrated and natural. Amazing Tang scenery has been vividly portrayed.

Dong Zhuang Tu (East Village) is an album of Chinese paintings created by Shen Zhou, the founder of the Wumen School of Painting and one of the “Four Ming Schools”. The album was originally 24 pictures and 21 pictures are in existence. It is now in the collection of Nanjing Museum.

Dong Zhuang Tu (East Village) was painted by Shen Zhou for his friend Wu Kuan’s private garden, Dong Zhuang. This artwork is in folio format. Water has been used as an important element, where the fine pen marks are exquisite and the thick pen marks are expressive. The geographical location and the garden features implicitly and powerfully express the quiet, elegant and handsome garden charm. In the use of color, Shen Zhou’s successfully created and achieved excellent color performance by blending clear water color with heavy ink color and light crimson color.

Jiang Xing Chu Xue Tu (Early Snow River View) is an ink and color painting on silk created by Zhao Gan during the period of the Five Dynasties. The artwork is 25.9cm by 376.5cm. Currently collected in Chinese Taipei Palace Museum.

Jiang Xing Chu Xue Tu (Early Snow River View) describes the working scenes of people in fishing villages along the Yangtze River during the period of early snow. Forms of close-range and medium-range shots have been implemented, just like the current close-up photography technique. The use of this technique enlarges the characters in landscape paintings, condensing a large number of characters in a close scene, presenting in front of us, and makes these characters as regular key elements in the landscape paintings. This scroll reflects the pursuit of self-individuality in Southern Tang painting art, and reflects the civilian art style of real life. It has become the most contemporary feature of Southern Tang painting.

Zao Chun Tu (Early Spring) depicts the scene in the mountains in the north during early spring. It adopts a panoramic composition and integrates high, far-reaching, and flat techniques in one painting. The whole picture presents a strong vertical feeling. Through the meticulous depiction of the mountains, the author successfully expressed the seasonal changes of winter and spring, the earth’s recovery, and the replacement of all things. The picture is quiet and vibrant, full of vigor and delight, created a feasible, impressive, travelable, and habitable rhyme.

Rui He Tu (Cranes above Kaifeng) is created by Song Huizong Zhao Ji, who was the last emperor of the Northern Song Dynasty. The painting is 51cm by 138.2cm. Currently collected in Liaoning Museum.

Rui He Tu (Cranes above Kaifeng) depicts the spectacular scene of cranes hovering above the palace. The composition has changed from the traditional. Eaves reflect the flying cranes above, give the storyline to audiences, where the surreal expression technique has been implemented. Each flying crane has its own postures. The picture is full of vitality, solemn and luxurious feelings, and expressing Song Huizong’s expectation of prosperity and peace in his empire. 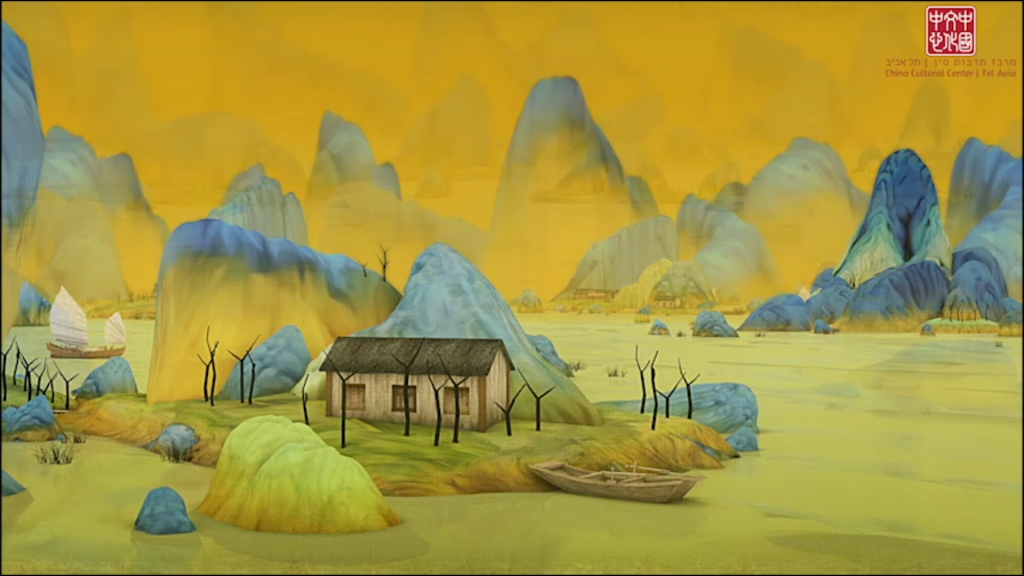 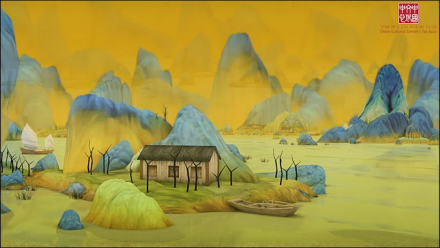 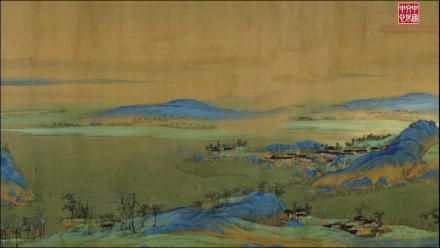 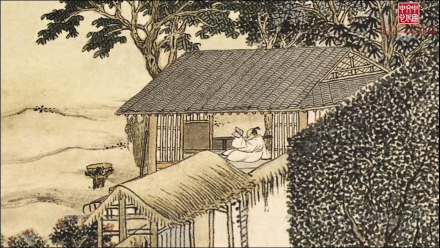 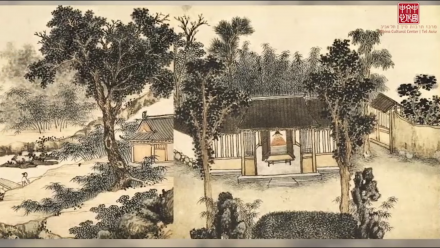 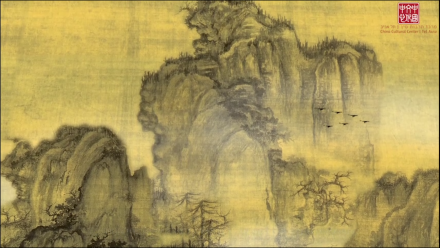 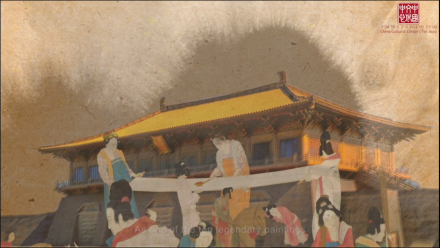 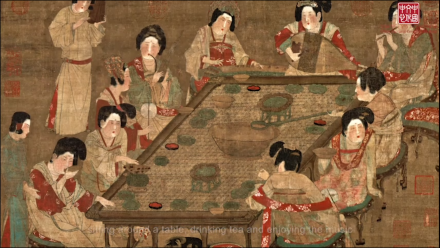 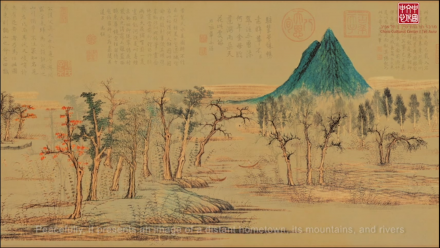 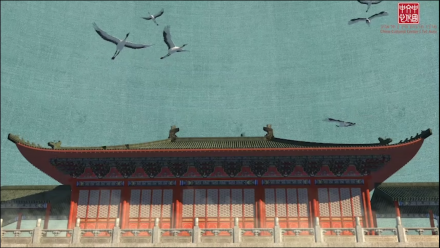 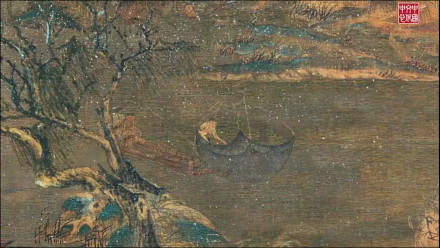 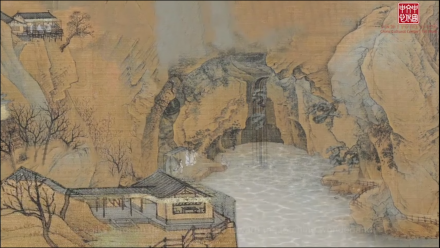