A Taste of China- Journey of Xinjiang Cuisine

עמוד הבית » A Taste of China- Journey of Xinjiang Cuisine

Xinjiang is a fairly large geographical area that leads to the diversity of climate and environment as well as the customs of the area, and also inspires the creativity of Xinjiang people in food. In Xinjiang, people enjoy the food and experience a combination of cultures and multi-ethnic styles that can live together in harmony.

Night Market of Kashgar:
Kashgar is the westernmost city in China, that located in southwestern Xinjiang.. In Kashgar can be found the most magnificent landscape you can imagine. Kashgar’s rich historical and cultural relics, make it the most Uyghurian city in southern Xinjiang. Kashgar is one of China’s national historical and cultural heritage cities, whose unique ethnic custom, culture, art, and architectural style adds infinite charm to it. Delicacies are ubiquitous. On the streets, in the alleys, in big and small markets, local gourmet snacks can be seen everywhere. At twilight, the night market becomes a moving feast, where the best delicacies of Kashgar can be found. All-embracing and fulfilling all people’s imagination for food. The liveliness in the thousand-year-old city brings out the warmest sentiments in people. Come to Xinjiang and visit Kashgar. Go to the night market to search and discover unique delicious food. In Kashgar, you can find happy smiling faces. Come to Kashgar to discover the mystery of the city’s temptation.

Naan – Turpan’s Cuisine:
Turpan is a basin located between mountains in the eastern part of Tianshan, Xinjiang. Mystical natural scenery and a long and rich history are intertwined in one location. Turpan is an important town on the ancient Silk Road. In ancient times on the Silk Road, Naan was an essential food for traveling merchants. For the present Turpan people, Naan is not just food, it has become a kind of emotional sustenance. Making Naan is indeed a basic need of life, that starts each and every day. The Naan baker kneads the dough on a cutting board, forms the shape by hand, and uses wood carving patterns to make a circle of patterns on Naan bread. Making Naan bread requires spread sesame and light oil. Then, the Naan bread is thrown into the pit. Precisely controlling the baking temperature of the Naan pit is crucial to perfecting naan’s taste. Under high temperate Naan becomes golden and crispy, rich aroma of wheat rushing up. Naan in Turpan today evolving from staple food to a special delicacy has become Turpan’s signature.

Fish and Lamb Soup- Altay’s Cuisine:
Altay is a city located in Northern Xinjiang, known as the “Water Tower” of Northern Xinjiang. Kazakh is one of the ethnic groups that have lived here from generation to generation, ride on camels carrying all their belongings and drive their cattle and sheep through mountains and gorges, over rivers and brambles, to pursue greener pastures. Every year the Lambs in Altay have tender meat and rich fat. No need for any extra ingredients, stews in a pot of clear broth over a charcoal fire and a little bit of salt and pepper is all you need for cooking Juicy and delicious soups. In winter, people in Altay cook fresh fish just caught from Fuhai lake, and cook soup with lamb. The flesh of fish absorbs the strong smell of the lamb, while the lamb absorbs the sweetness of the fish. In this way, it gets rids of both the excessive greasiness of lamb and the smell of fish and it tastes fresher and more delicious. Fish and Lamb Soup is an important dish to keep out the cold. In Altay people are here to pursue the life they love. They hold fast to their eternal faith interpreting the true meaning of life through happiness.

Hand Pilaf- Ili’s Cuisine:
Ili is located in Northwestern Xinjiang, at the foot of the Tianshan Mountains, known as “paradise on earth” is the epitome of Xinjiang’s beautiful scenery. Xinjiang Hand Pilaf represents the enthusiasm and hospitality of “The Tastes of Xinjiang”. Hand Pilaf is made from a variety of ingredients all derived from the region’s unique resources. For locals, eating Hand Pilaf is a habit, a custom and the taste of life. The ingredients for Xinjiang Hand Pilaf are very exquisite. Lamb must be fresh and tender. Xinjiang’s unique yellow carrots are indispensable. Xinjiang Pilaf’s rice has a long growth cycle with more light exposure, which means fuller grains, clear color, and mellow taste. Quality raw materials and ingredients are made into steaming and nutritious Hand Pilaf, as one of the favorite delicacies of Xinjiang people.

Big Plate Chicken- Urumqi’s Cuisine:
Urumqi located in central Xinjiang at the northern foothill of the Tianshan Mountains is the capital of Xinjiang, the furthest city from the ocean in the world. In this city, you can taste authentic Xinjiang flavors. Urumqi is a modern city, has become a city that connecting between Central Asia and South Asia and even Europe. The famous dish of Urumqi called Xinjiang Big Plate Chicken. Xinjiang Big Plate Chicken has become the most memorable taste of Xinjiang people. The dish is a complementary infusion of a rich variety of ingredients and multiple fusions coexist in harmony. The dish gets its name from a famous saying: big plate, enough to eat is well known in china and leaves a deep impression on people. The colorful ingredients demonstrate the open-mindedness and hospitality of Xinjiang people. 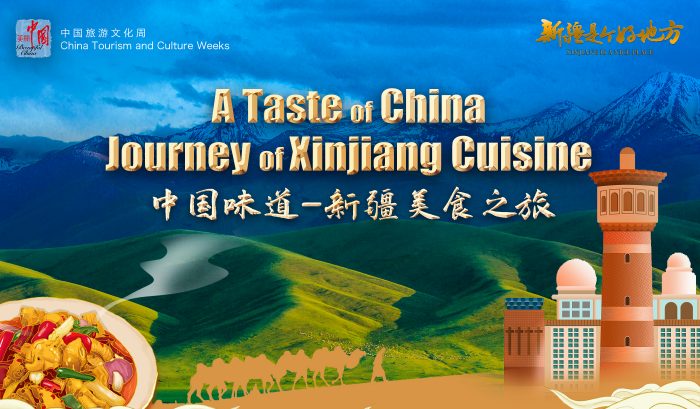