Lit with splendid lanterns, the impressive Qinhuai River extends 5 kilometers, unleashing a relaxed, classical charm. Among the numerous pieces of intangible cultural heritage, Qinhuai Lantern Festival is undoubtedly the shiniest. Since the Qinhuai District resumed the annual Qinhuai Lantern Festival in 1986, the event has developed remarkably and become the largest and most influential traditional folk culture show in Nanjing and even in Jiangsu Province during the Spring Festival, enjoying great popularity among Nanjing citizens as well as tourists from home and abroad. In 2006, Qinhuai Lantern Festival was included in the First National List of Intangible Cultural Heritage of China, becoming the “top brand” of Qinhuai Culture. Lotus lanterns, which are representative of Qinhuai lanterns, have been used as the image of a stamp distributed domestically and overseas by the State Post Bureau. Qinhuai District has won the titles of “Home of Chinese Folk Art (Lanterns)” and “Home of Chinese Lanterns” for three times. The Qinhuai Lantern Festival has been ranked first place among the “Top 10 Outstanding Cases of the 1st Integration of Intangible Cultural Heritage and Tourism” and first place among the “Top 100 Folk Culture Brands in Jiangsu Province”.

Today, the traditional folk custom of “visiting the lantern show at Confucius Temple” has long been an indispensable part of Nanjing citizens’ celebration of the Chinese New Year. Qinhuai Lantern Festival, as the most important annual festive, folk custom and cultural activity during the Spring Festival in Nanjing, not only reflects the city’s unique historical and cultural appeal, carries on the outstanding traditional Chinese culture, and meets people’s needs for happy life in the new era, but also serves as a cultural messenger for Nanjing to the outside world and enhances the city’s brand influence. 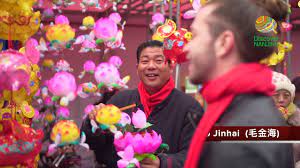